Capitoline Hill – the facade was designed by Michelangelo

Day 1: Rome: Arrive in Rome by an early morning flight. Transfer to a hotel. After some relaxation, embark on a city tour of Rome, the capital of Italy.

Start the day with a visit to Colosseum, built by emperors of the Flavian dynasty between 72 and 80 AD on the site already occupied by an artificial lake during Nero’s regime. A highly popular place among tourists, Colosseum name has been derived from the high colossal bronze statue of the Emperor Nero standing nearby.

Next visit Roman Forum, a rectangular forum surrounded by the ruins of several important ancient government buildings at the center of the city of Rome.

Afterwards, visit Capitoline Hill, one of the Seven Hills of Rome. This had been the citadel of the earliest Romans. The highlight of the Capitoline Hill as of now is the beautiful Piazza del Campidoglio. This was masterfully designed by Michelangelo. The square is bordered by three palazzos, all with facades designed by Michelangelo. These are Palazzo Senatorio, Palazzo dei Conservatori and Palazzo Nuovo. Palazzo Senatorio, which serves as the seat of the Mayor of Rome, stands in the centre. The other two Palazzo dei Conservatori and Palazzo Nuovo are home to the Capitoline Museum.

From the Piazza del Campidoglio you can walk straight to the Victor Emmanuel II Monument, a massive monument also known as Il Vittoriano. This was built in the early 20th century to honor Italy’s first king.

Have dinner and retire to your hotel room. Overnight in Rome.

Inside Vatican Museum, a part of Vatican Palace

Headquarter of the Pope; Vatican City has a lot of big and small attractions for tourists. Keep the two must-see sights – St. Peter’s Basilica and the Sistine Chapel – for the third day in Rome. Instead, on this second day in Rome, explore the Vatican Palace, which contains magnificent rooms decorated by the greatest artists of their time. There are over a dozen museums which has priceless collections.

Go to the top of the dome and see the crypts, monuments, painting, and statues along the way. Just make sure to come quiet early in the morning to avoid long queues.

Other than the big museums, there are collections for specialized interests also. There are more than 800 works of modern religious art by Matisse, Dali, Munch, Rouault, and others. You can also find several objects brought back by missionaries. There is a small museum displaying finds from catacombs and early Christian churches. There is a Map Gallery also. Gallery of candelabras and tapestries is also an interesting place.

Have dinner in the evening and have a nice overnight sleep.

Day 3: Rome – Florence: Start the day with a visit to Basilica di San Pietro (St. Peter’s Basilica). Look at the size and the magnificence of the building. The cupola was designed by Michelangelo. Go and visit Michelangelo’s Cappella Sistina (Sistine Chapel). Also Visit Castel Sant’Angelo, built initially in 135 as a mausoleum for the Emperor Hadrian and his family.
Visit Piazza del Popolo in the afternoon. The square has an Egyptian obelisk from the 13th century BC and has a lovely Santa Maria del Popolo Church too. Here you can observe tourists from all over the world.

In the evening, take a train ride of around 90 minutes to reach Florence, Tuscany’s most famous city, and one of the most popular tourist destinations in Italy. Transfer to a hotel on arrival in Florence. Retire to your hotel room. Overnight in Florence.

Day 4: Florence: Embark on a full day sightseeing tour of Florence, the cultural capital of Italy filled with several museums and cathedrals.

Start with a visit to Piazza Santa Maria Novella where you can admire the recently renovated square with its beautiful Santa Maria Novella Church. Later move to Piazza San Lorenzo and take a quick visit to the San Lorenzo Church. The Church, which has an unfinished facade, is where Medici family once worshipped. You should also visit Medici Chapels, final resting place for the Medici dynasty. You can see beautiful marble statues by Michelangelo in the New Sacristy.

Move on to Piazza Santa Croce where you should visit the impressive Santa Croce Church where many great Florentines and Tuscans have their final resting places, including Michelangelo and Galileo. 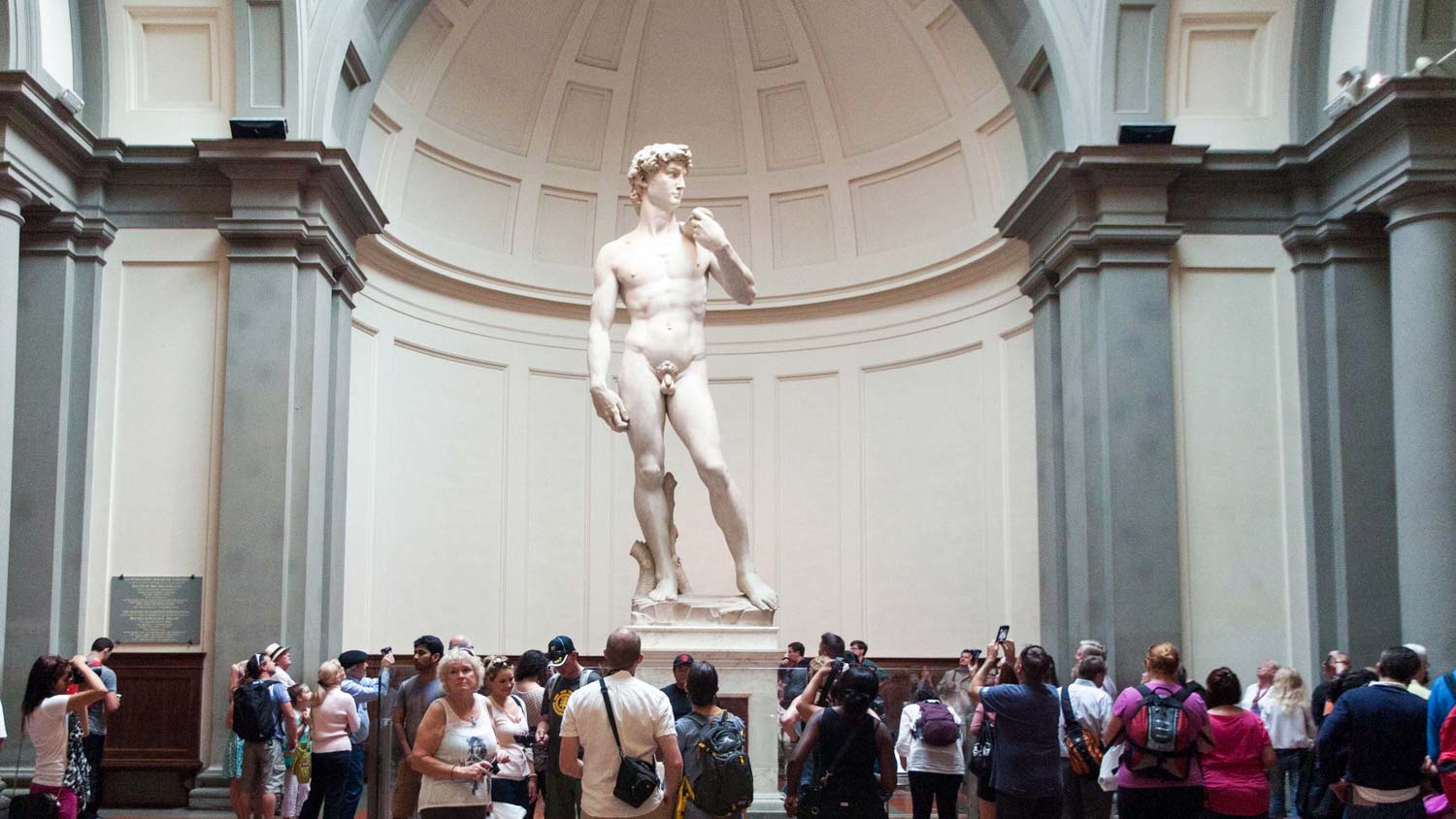 Visit Accademia Gallery which houses Michelangelo’s original marble statue called David. A copy of it is made in front of Palazzo Vecchio. Go on to visit Piazzale Michelangelo, a famous square in Florence offering a magnificent panoramic view of the city.
You can indulge in some shopping in Oltrarno district. Finally, towards the evening head to Piazza Santo Spirito with its Church of Santo Spirito. The Church, built by Brunelleschi, stands tall over the square. It has many artistic treasures hidden inside it. There are several restaurants and cafes around the square. Feast on Tuscan dishes and enjoy wines and head to your hotel room afterwards. Overnight in Florence.

Day 5: Florence: Visit Piazza del Duomo in the heart of Florence. The Cathedral of Santa Maria del Fiore has a huge cupola made by Filippo Brunelleschi. From the top you can have a unique view of the whole city.

Visit Uffizi Gallery, one of Italy’s top art museums with its large collection of Renaissance works. There are paintings by famous artists such as Michelangelo and da Vinci. Connected to the Uffizi Gallery is Florence’s most celebrated landmark, the Ponte Vecchio or literally, the old bridge.

Next visit Piazza della Signoria, which was once the center of Florence’s political power for centuries. This beautiful open piazza is just in front of the Palazzo Vecchio and is surrounded by Loggia dei Lanzi (an amazing outdoor sculpture gallery). This has different statues like Perseus with the head of Medusa by Benvenuto Cellini and the Rape of the Sabine women. In the piazza itself admire Neptune’s Fountain by Ammannati and the equestrian statue of Cosimo I by Giambologna.

Day 6: Florence – Venice: Take an early morning train ride of two hours to reach Venice. Check into a hotel on arrival in Venice. Immediately after embark on a tour of Venice.

Venice is a group of 117 small islands separated by canals and linked by bridges. A part of the city, along with its lagoon, is listed as a World Heritage Site. Start the city tour with a ride of the most iconic and picturesque waterways in an iconic gondola. You will remember many a film where Venice waterways have been filmed.

Afterwards, visit St. Mark’s Basilica, a monument often seen as the living testimony of Venice’s links with Byzantium. It has unique glittering mosaics swathing its interior. Thereafter visit Doge’s Palace which was Venice’s political and judicial hub. You can get a glimpse of the hidden offices, courtrooms, archives, and prisons from which the true Venetian Republic ruled for 900 years. You can witness some of the best art works in palazzo’s public rooms done by the famous painters like Titian, Tintoretto, and other giants of the Venetian Renaissance period.

Walk over the famous Bridge of Sighs. Begin your evening with the classic Venetian aperitivo, an Aperol spritz (Aperol with sparkling wine and soda). Follow this up with cicchetti (Venetian tapas), and if you still long for a proper dinner, you can have it one of the restaurants. Overnight in Venice.

Day 7: Venice – Rome: Go on an excursion visiting the three major islands in the Venetian lagoon. Murano is famous for glass-making, Burano is famous for lace-making (and it’s brightly-painted houses), and the remote Torcello is where the city of Venice got its start. Torcello, most secluded of the three, has stunning mosaics in its old cathedral. Murano is from where you can buy some glass made souvenirs.

Visit the Gallerie dell’Accademia, a museum gallery of pre-19th century art located at the south bank of the Grand Canal. If time permits pay a visit to the modern Peggy Guggenheim Collection, and San Rocco.

Towards the evening catch a fast train to Rome. Transfer to a hotel on arrival in Rome.

Day 8: Rome – Onward Destination: Go around Rome and see what you could not see in the first three days of the itinerary. Check out from the hotel and head to the airport to catch the international flight for your onward destination.