Most people arrive in Vietnam by air into Hanoi or Ho Chi Minh City. Most tours of Vietnam start off in one of these two busy cities. You going either south to north or from north to south. If you have just 4 or 5 days, base yourself out of either Hanoi or Ho Chi Minh City. First-timers are often overwhelmed by the chaotic traffic, busy markets, pesky touts, and hot weather — hang in there, it just takes a bit of getting used to.

Highlights: This trip takes you to the main UNESCO World Heritage Sites of Vietnam, including Halong Bay, Hue, Hoi An, and My Son.

Hanoi Citadel. This was the seat of power as several dynasties ruled from here.

Day 1: Hanoi: Arrive in Hanoi, the capital of Vietnam and known for its centuries-old architecture. Check into a hotel. Later, after some relaxation go for the street food tour of Hanoi, a city with rich culture showing Southeast Asian, Chinese and French influences. Later go and watch Thang Long Water Puppet Show in the evening. Overnight in Hanoi.

Day 2: Hanoi – Halong: In the early morning, take a walk around central Hoan Kiem Lake and the Old Quarter, and then visit the Hanoi Citadel — with Ho Chi Minh’s Mausoleum, House, and Museum, as well as the One-Pillar Pagoda. In the late afternoon move to Halong City. Check into a hotel. Overnight in Halong.

Day 3: Hanoi- Halong – Hanoi: Take an early morning boat cruise on Halong Bay, stopping at some of the main cave sights. Check out Thien Cung Grotto (Heavenly Cave) or Surprise Cave, and enjoy lunch aboard the ship before returning to Hanoi in the late afternoon. Overnight in Hanoi.

Day 4: Hanoi – Hue: Take a morning flight to Hue, the old Imperial City in central Vietnam. The city is located on the banks of Song Huong River (Perfume River). Visit the Hue Citadel, the Thien Mu Pagoda, and the tomb of Tu Duc. Other attractions worth a visit are Thanh Toan Bridge and Ho Quyen – Tiger Fighting Arena. One can still see claw marks on the walls. Enjoy Hue cuisine at one of the several restaurants.

Day 5: Hue – Hoi An: After breakfast in the morning check out and visit any more place you want to see in Hue. Visit Tomb of Minh Mang, one of the magnificent monuments to see in Hue. With very impressive pavilions, courtyard, palaces, and temples with sensational workmanship, this tomb gives a peep into architectural designs and construction of that era.

In the afternoon, after lunch, start for Hoi An – a drive of four hours. Along the way there are famous heritage places like Lang Co beach, Hai Van Pass, and My Khe beach, tourists may be interested in stopping at. Check in at a hotel in Hoi An. Overnight in Hoi An. 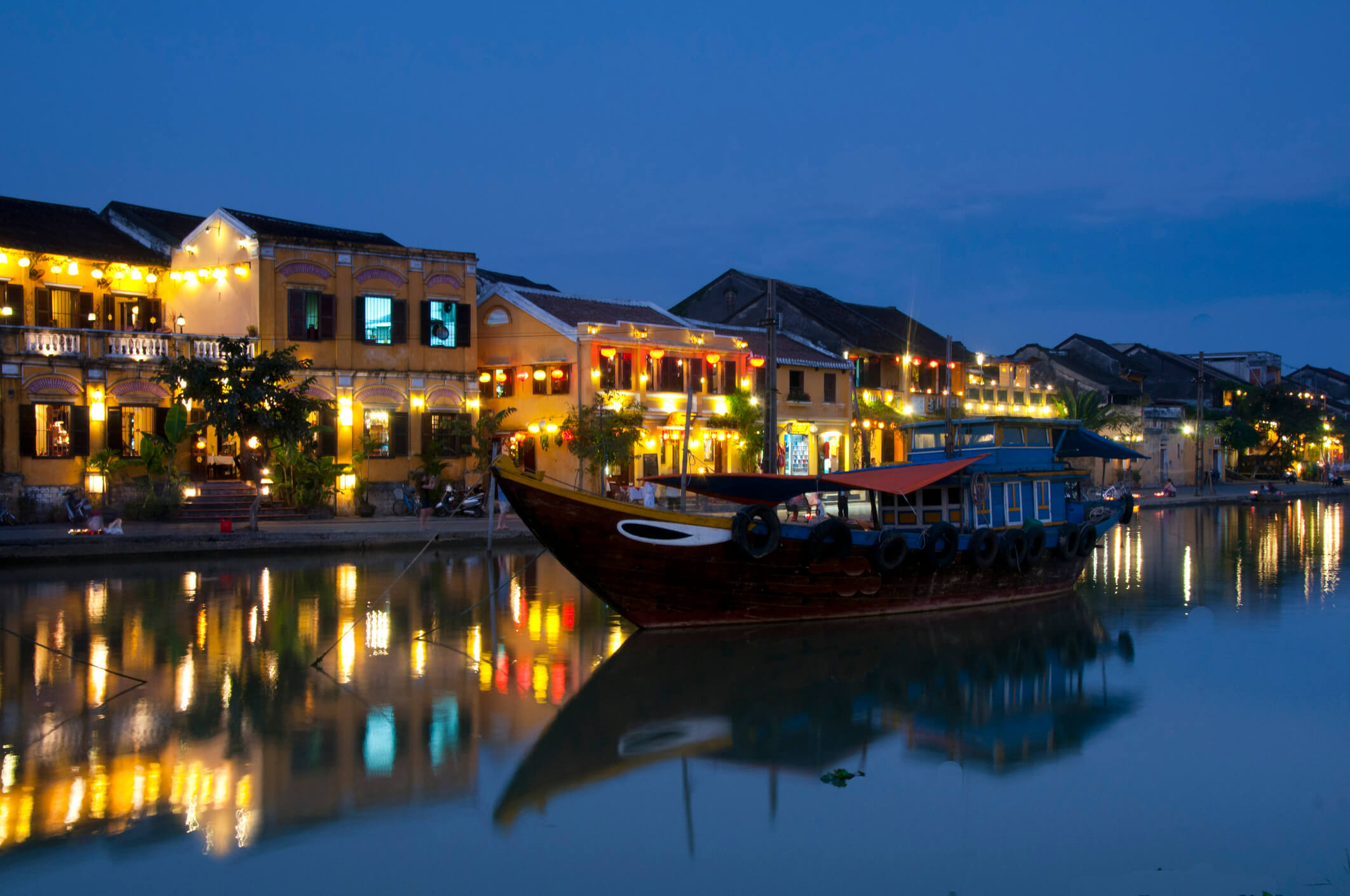 Hoi An – a UNESCO World Heritage Site in Vietnam

Day 6: Hoi An: Hoi An is a UNESCO World Heritage Site located on the coast of the South China Sea. Take an all-day tour of the ancient Town, stopping at Chinese pagodas and congregation halls, the Japanese Bridge, and the museums and old shop houses. Keep the afternoon for fun and frolic on Cua Dai Beach. In the evening go for shopping. Have a nice dinner at one of the restaurants. Overnight in Hoi An.

Day 7: Hoi An – My So’n – Hoi An: Set out in the morning for an all-day trip to the hilltop temples of stunning My So’n, a UNESCO World Heritage site. A little over an hour’s drive from Hoi An, Mỹ Sơn is a cluster of abandoned and partially ruined Hindu temples constructed between the 4th and the 14th century AD by the Champa rulers. There were some 68 temples originally, but only 20 have remained now. American bombings during Vietnam war destroyed many of these temples.

Return to Hoi An. If interested, go for a relaxing evening to the beach. Overnight in Hoi An. 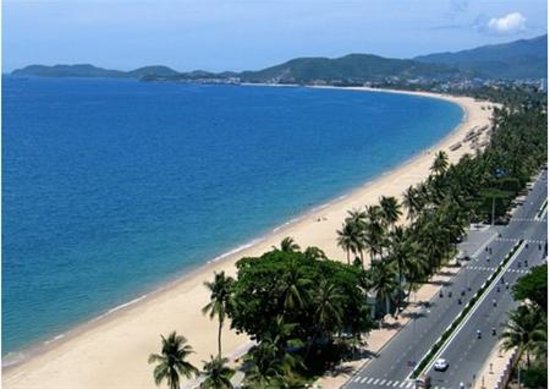 Day 8: Hoi An to Hanoi (via Danang): After breakfast, check out from the hotel and start for Danang, a coastal city in Central Vietnam, located at an hour’s drive from Hoi An. Danang, situated midway between Hanoi, the capital in the north, and Ho Chi Minh City, the commercial hub in the south.

On the way from Hoi An to Danang, stop at Marble Mountains. These are limestone outcrops jutting out of the sea. Paths lead to the top of the forested cliffs, affording spectacular views of Non Nuoc Beach (or China beach) and the South China Sea. There are caves nestled in the cliffs. These were inhabited by Cham people originally. Nguyen rulers built several pagodas among these caves. There are artisan villages living at the base of these mountains producing sculpture and artwork.

Make a visit to Cham Museum, built on the banks of Han River in the heart of the city, to see all the statues, sculptures and reliefs that were removed from My So’n.

Later take a flight from Danang to Hanoi. Reach Hanoi and check into a hotel. Overnight in Hanoi.

Day 9: Hanoi: Go for some last minute shopping in Hanoi, if you so desire. Check out and leave for the international airport for your flight for onward destination.

Highlights: A combined tour of the special places of the North and South Vietnam, with visit to some UNESCO World Heritage Sites and pristine beaches and islands.

Day 1: Ho Chi Minh City: Arrive at the International Airport in Ho Chi Minh City, also referred to as Saigon. Check into a hotel after arrival. Relax for some time and in the evening take a stroll near the river. Visit a restaurant and try genuine local cuisine at one of the several eateries in the city. Overnight at the hotel. In the afternoon, visit Cuchi Underground Tunnel – used during battle in Vietnam War closely to Saigon City. Return back, take strolls in the city and spend overnight in  Ho Chi Minh City.

Day 3: Ho Chi Minh City – Mekong Delta Tour: After an early breakfast in the morning, start for My Tho, the capital of Tien Giang province and an important market town. This is the first bustling town of Mekong Delta. Go on a boat cruise along the Mekong River to visit the orchards on the Thoi Son Islet. Enjoy tropical fruits of the season, visit Honey-bee farm and Coconut Candy Workshop. Go on narrow hand-oared boats along the canals. Have a nice lunch.

Day 4: Ho Chi Minh City – Danang – Hoi An: Transfer to the airport after breakfast and catch a flight to Danang, a coastal city in Central Vietnam. Make a visit to Cham Museum, built on the banks of Han River in the heart of the city, to see all the statues, sculptures and reliefs that were removed from My So’n, a UNESCO World Heritage city.

Start for Hoi An – a drive of over one hour. On the way, stop at Marble Mountains. These are limestone outcrops jutting out of the sea. Paths lead to the top of the forested cliffs, affording spectacular views of Non Nuoc Beach (or China beach) and the South China Sea. There are caves nestled in the cliffs. These were inhabited by Cham people originally. Nguyen rulers built several pagodas among these caves. There are artisan villages living at the base of these mountains producing sculpture and artwork.

Have some fun and frolic on the beach. Reach Hoi An and check into a hotel. Once settled into the hotel, you can and explore the market or visit Cua Dai Beach, some six kilometers from the town. Return to the hotel to have a well deserved overnight rest.

Hoi An is also a shopper’s paradise. It is specially known for making custom –tailored clothing in short-time. You can buy ceramic souvenirs, rice paintings, or shoes. Overnight in Hoi An.

Day 6: Hoi An – Hue: After breakfast, start for Hue, a drive of four hours. Hue, the old Imperial City in central Vietnam, is located on the banks of Song Huong River (Perfume River). On the way, visit Hai Van pass and Lang Co beach. Check into a hotel once you arrive in Hue.

In the afternoon, embark on a cycling tour of Hue and the surrounding area. Visit Citadel, which has the Imperial City and Forbidden Purple City within it. Overnight in Hue.

Day 7: Hue – Hanoi: Go for cruise along the Perfume River in the morning to visit the ornate tomb of Emperor Minh Mang. From here cruise back to the eccentric Tu Duc’s tomb, and discover the Emperor’s opulent lifestyle. Board a dragon boat in the Perfume River and enjoy lunch while cruising back down towards Hue. On the way stop to visit the impressive Thien Mu Pagoda. Many consider this as the unofficial symbol of Hue. Take an evening flight to Hanoi. Transfer to the hotel. Overnight in Hanoi.

Day 8: Hanoi – Halong: In the morning transfer directly to Halong Bay. After enjoying the beauty of Halong Bay, transfer to Ha Long City. Check into a hotel on arrival in Ha Long City. Go and enjoy some delicious Vietnamese delicacies at one of the many local restaurants. Overnight in Halong.

Day 9: Ha Long – Cat Ba Island National Park: Go for a cruise of Ha Long Bay boarding a boat. If interested, swim in the bay’s emerald waters. Visit the splendid caves. Take a nice lunch on return and head for Cat Ba Island town, the largest of the 367 islands in Halong Bay, making up its southeastern edge. Check into a hotel or resort or a guest house.

Explore the township of Cat Ba on a motorbike or visit the National Park, famous for critically endangered golden-headed Cat Ba langur. There are some smaller but gorgeous beaches on the Island. Enjoy nice dinner at one of eateries. Overnight in Cat Ba Island.

Day 10: Cat Ba Island –Hai Phong – Hanoi: In the morning, catch the local ferry to Hai Phong, around three hours away. Have breakfast on board the ferry before arriving in Hai Phong. Take a short city tour before heading to Hanoi.

Arrive in Hanoi in the afternoon. Check into a hotel. Take some rest and head off to visit Ethonology Museum and Hoa Lo (former prison). Overnight in Hanoi.